Progestogen activity None (no data available)

Fluoxymesterone is an oral anabolic steroid derived from testosterone. More specifically, it is a methyltestosterone derivative, except that 11-beta-hydroxyl and 9-alpha-fluoro groups are added. It is a potent orally active non-aromatizing steroid with extremely strong androgenic properties. Flutestosterone is significantly more androgenic than testosterone, and the anabolic effects of this drug are considered moderate by comparison. This makes fluoxymesterone a powerful drug, but not the most ideal muscle-building steroid. The main effects seen when taking fluoxymesterone are increased muscle strength, increased muscle density and increased definition, with little help for the increase in dimension. In the world of steroids, Halotestin is known for being the most powerful and fastest steroid on the market. However, it is not something many steroid users will use. Despite its massive anabolic effects, this steroid doesn't produce massive muscle gains; in fact, it doesn't actually do much for muscle growth.

Fluoxymesterone was first developed in 1956, when researchers tested it to have approximately 20 times the anabolic potency of methyltestosterone (by contrast, its relative anabolic effects in humans are less potent). It entered the U.S. prescription drug market shortly after the Halotestin (Upjohn) brand name, and soon after under the brand name Ultandren (Ciba). Fluoxytestosterone was originally described as a halogenated derivative of testosterone with up to 5 times more anabolic and androgenic potency than methyltestosterone.

Fluoxymesterone in the medical field:

Early medical prescribing guidelines recommend its use in both sexes to promote muscle tissue repair and growth, such as burns, delayed fracture healing, chronic malnutrition, debilitating disease, convalescence, paraplegia, and catabolism from chronic cortisone use. For male treatment of insufficient androgen levels. By the mid-1970s, the FDA had gained more control over the U.S. drug market. One of the first major changes in the use of steroid drugs came when the FDA required strong substantiation of each drug's potential use. Prescribing guidelines for flutestosterone were quickly improved, with new prescribing guidelines indicating that the drug is "effective" for treating various forms of androgen deficiency in men, reducing the severity of postpartum breast pain and treating androgen response in women Sexually inoperable breast cancer. It is also listed as "possibly effective" for the treatment of postmenopausal osteoporosis, and current prescribing guidelines for fluoxymesterone only list its use in the treatment of androgen deficiency in men and breast cancer in women. In recent years, fluoxymesterone has been increasingly seen as a controversial drug in the eyes of most clinicians, and its hepatotoxicity and negative effects on blood lipids are often cited as a way to avoid its use in otherwise healthy men for the treatment of male and female Causes of hormonal insufficiency.

Fluoxymesterone is a modified form of testosterone. It differs by 1) the addition of a methyl group at carbon 17-alpha, which helps protect the hormone during oral administration, 2) the introduction of a fluorine group at carbon 9 (alpha) and 3) the introduction of a hydroxyl group hydroxyl. Carbon 11(β), inhibits steroid aromatization. The latter two modifications also greatly enhanced the androgenic and relative biological activity of the steroid relative to 17-alpha methyltestosterone.

Fluoxymesterone has some very powerful effects. Fluoxymesterone can greatly increase hematocrit and hemoglobin levels, as well as red blood cell mass. It also appears to work through cells that are already committed to the erythropoietin response. These effects are the main reason for the boosted strength effect as well as the increased energy levels that steroids can provide.

Fluoxytestosterone also has a strong fat-reducing effect, fluoxytestosterone has the ability to promote the regulation of fatty acid oxidation in the liver, and fast-twitch fiber mitochondria. Through the interaction of these taits and red blood cells, fluoxymesterone has almost become one of the artifacts of athletes preparing for the competition. At the same time, the effect of fluoxymesterone on red blood cells will greatly enhance the strength of the user. Because of this feature, fluoxymesterone is also A preference of many powerlifters.

Fluoxytestosterone is not aromatized by the body and has no measurable estrogen. Antiestrogens are not required when using this steroid, as there is no need to worry even in sensitive individuals. Since estrogen is often the culprit in water storage, this steroid can give the body a lean, premium appearance without worrying about the body's water storage. This makes it an advantageous steroid to use during a fat loss prep cycle

Fluoxymesterone is greatly affected by 5-alpha reductase, the same enzyme responsible for reducing testosterone to dihydrotestosterone. Therefore, the use of 5-alpha reductase inhibitors such as finasteride may reduce the androgenic side effects associated with fluoxymesterone. This use will not completely suppress the androgenic activity of this steroid, but it may reduce the effects it has. So those who are sensitive to androgenic side effects may need to give up using this steroid. Due to its extreme androgenic properties, women are quite sensitive to fluoxymesterone and are very prone to virilization symptoms once used. Virilization symptoms include body hair growth, deepening of the vocal cords, and clitoral enlargement, and because fluoxymesterone is so potent, it is impossible for most women to avoid the possibility of virilization. The only way fluoxymesterone is used in women is for the treatment of androgen-sensitive inoperable breast cancer, and female athletes should not use fluoxymesterone.

Fluoxymesterone is a c17-alpha alkylated compound. This alteration protects the drug from inactivation by the liver, allowing a very high percentage of active drug to enter the bloodstream after oral administration. C17-alpha alkylated anabolic/androgenic steroids can be hepatotoxic. Prolonged or high dose use may cause liver damage. In rare cases, life-threatening dysfunction may occur. The use of c17-alpha alkylating steroids is usually limited to 6-8 weeks for good health. The study administered 20 mg of fluoxymesterone to nine male subjects for two weeks, resulting in abnormal sulfobromophthalein (BSP) retention noted in most patients (6/9).

The use of fluoxymesterone

Like most oral anabolic steroids, fluoxymesterone should be taken on an empty stomach. Taking with food may decrease its bioavailability. Early medical prescriptions for fluoxymesterone called for 2-10 mg per day. Current prescribing guidelines call for a daily dose of 5-20 mg. The therapeutic dose is usually 20 mg, and in medical use, the drug will continue to be used for a long time unless the patient shows significant side effects of the drug. For muscle growth or improved athletic performance, effective oral daily doses of fluoxymesterone are in the range of 10-40 mg for no more than 6-8 weeks to minimize hepatotoxicity. This dose is sufficient to significantly increase muscle strength accompanied by a modest increase in muscle mass. Fluoxymesterone is commonly used by athletes in weight-restricting sports such as wrestling, weightlifting, and boxing, because strength from the drug is usually not accompanied by body weight. a substantial increase. When used properly, it can keep an athlete within a specified body weight while greatly improving his physical performance. Fluoxymesterone is also commonly used in preparation for competition. When athletes are at low body fat percentage, strong androgen levels (in the absence of excess estrogen) can cause the appearance of extremely hard and defined ("ripped") muscles, and changes in the ratio of androgen/estrogen levels also Makes the body more inclined to burn excess fat and prevent new fat storage. Therefore, fluoxymesterone has a muscle "hardening" effect on athletes preparing for competition. 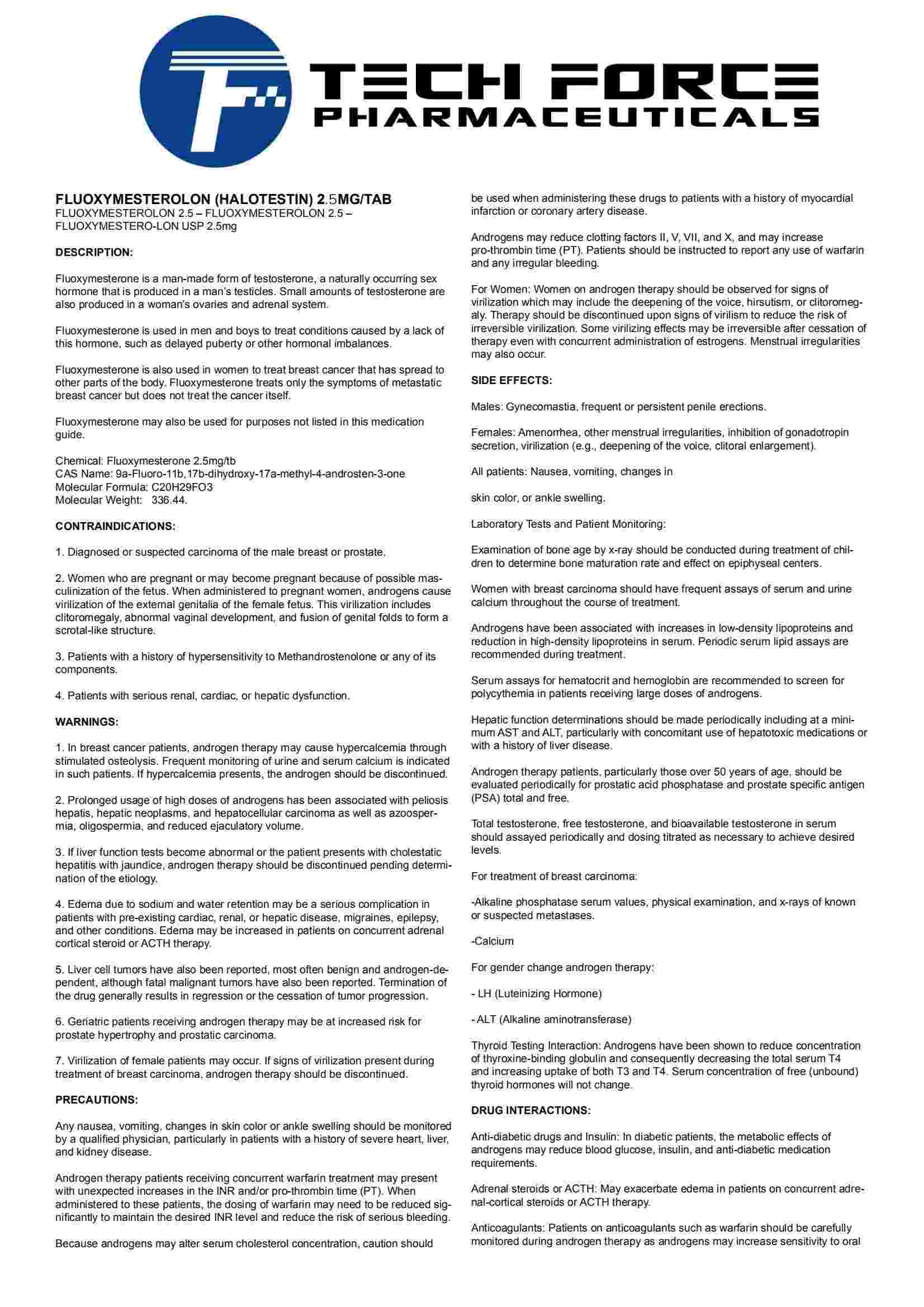