MGF exhibits local effects in skeletal muscle and without cannot travel through the body without modification. The problem with synthetic MGF is that it is introduced intramuscularly and is water based so it goes into the blood stream. When used this way, MGF only remains stable in the blood stream for a few minutes. Biologically produced MGF is made locally and does not enter the bloodstream. It is also short acting so stability is not an issue. By PEGylating the MGF it is almost as efficient as local produced MGF when used intramuscularly. This is accomplished by surrounding part of the peptide with a structure of polyethylene glycol, which can be attached to a protein molecule. The polyethylene glycol groups protect the peptide but don't surround it completely. The active sites of the peptide are still free to do their biological function. In this case the shell is a negative charged shield against positively charged compounds that would affect the protein. 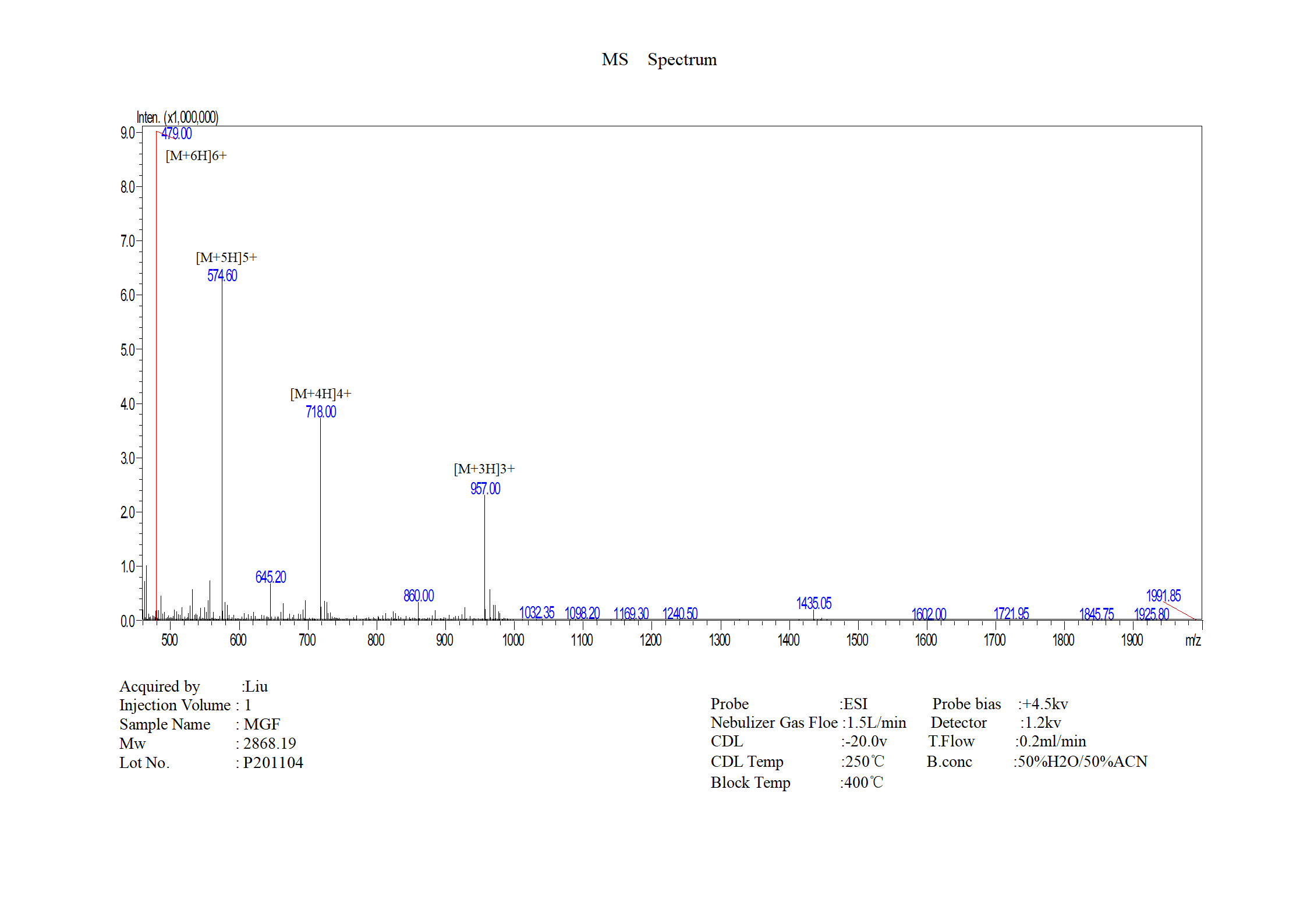 It was first discovered in the muscle by Goldspink, et al. In human muscle, a 49-base insert changes the reading frame in mechano grow factor (MGF) as compared to IGF-1.When mechanical overload is introduced to a muscle (as by weight training), the IGF-1 gene released and is differentially spliced during the bodies response. Initially, it it is spliced to produce predominantly IGF-1Ec (called the MGF splice variant of IGF-1). This early splicing stimulates satellite cells into activation. Which in turn allows the activation of extra undamaged nuclei to grow new muscle fiber and tissue.

The appearance of MGF also initiates the upregulation of new protein synthesis. After this initial splicing of IGF-1 into MGF, production then switches towards producing a systemic release of IGF-1Ea from the liver, which also upregulates protein synthesis as well. The expression of IGF-1 splice variants, over the course of the healing and regrowth phase of muscle repair is thought to be the primary anabolic mechanism by which the body produces new muscle. MGF is available as an injectable peptide, and it has been anecdotally shown that injecting it will cause a response in the area resulting in localized muscle growth.

MGF (mechano growth factor) has been used by bodybuilders and athletes for a few years already. After resistance exercise,IGF-1 is released within the muscle. Specifically, at this time, immediately following the mechanical use of a muscle, the IGF-I gene is spliced towards MGF which initiates hypertrophy and repair of local muscle damage. It does so both by activating muscle stem cells and satellite cells, but also via various other anabolic processes. It differs from "regular" IGF-1 mainly due to it's C-Terminal sequence. MGF can initiate muscle satellite (stem) cell activation in addition to its IGF-Ireceptor domain which ithen in turn increases protein synthesis turnover, and therefore can if used correctly improve muscle mass over time.

A typical protocol would be:

100-300mcg of MGF divided into 1-2 bilateral administrations in 2-5 different areas of the muscles approximately 5-7 days a week - intramuscular injections.

Example, if you want to administer 200mcg of MGF into the chest and biceps muscles 2 times a day and 3 different areas of the muscle then you would need to divided the dose as follows:

25mcg per muscle / 3 different locations on each muscle = 8.3mcg per injection

Theoreticall, the more locations used to administer the MGF into the muscle the more places for muscle growth.