Progesterone activity was not significant

The English name of Mesterolone Proviro is the brand name of Schering-Plough (now Bayer) oral androgen mesterolone (1-methyldihydrotestosterone). Similar to DHT, Mesterolone is a strong androgenic hormone, but has only weak anabolic activity. This is because, like dihydrotestosterone, mesterolone is rapidly reduced to inactive diol metabolites in muscle tissue with high concentrations of 3-hydroxysteroid dehydrogenase. Some argue that the weak anabolic properties of mesterolone suggest a tendency to block androgen receptors in muscle tissue, thereby affecting the effects of other, more potent steroids, which should not be accepted. In fact, due to its extremely high affinity for plasma-bound proteins such as SHBG, mesterolone may actually act to maintain the activity of other steroids by displacing a higher percentage to the free, unbound state. In athletes, Mesterolone is primarily used to increase androgen levels when dieting or preparing for competition, and is used as an antiestrogen drug due to its inherent ability to antagonize aromatase.

Schering developed Mesterolone Proviron in 1934, making it a very old drug in terms of anabolic/androgenic steroids, according to company literature. Schering also noted that it was the first clinical practice drug to treat "hormone-related disorders and complaints in men." "Thus, Mesterolone developed at about the same time as methyltestosterone (1935) and testosterone propionate (1937), which are very old drugs generally considered obsolete by today's standards. Despite its long history, Mesterolone is widely used in Has a long history of clinical efficacy and safety, and is still widely used in the clinic today. Usually prescribed in men for the treatment of decreased physical and mental ability caused by age and below androgen levels, and libido caused by insufficient androgen levels Low down, Mesterolone is widely produced by Bayer (formerly Schering), which now sells the drug in more than 30 countries around the world. The most common brand name used for distribution is Proviron, although Schering/Bayer already sells the drug in some markets as Agents are sold under other names, including Mestoranum and Provironum. In addition, other manufacturers have been selling Mesterolone for many years under the brands Pluriviron (Asche, Germany), Vistimon (Jenepharm, Germany) and Restore (Brown & Burke, India). Although its With a long track record of safety and efficacy, Mesterolone was never approved for sale in the U.S. However, it is still available in many Western countries. Today, Bayer remains the major (almost exclusive) global supplier of mesterolone, although In rare cases other brands of medication can be found

Mesterolone in the medical field

Considering that anabolic/androgenic steroids are often associated with infertility, the use of Mesterolone as a fertility aid may be one of the most controversial topics for the drug. This is also the use of Mesterolone that is often misunderstood by athletes. Mesterolone is appropriate here because it is a potent androgen with minimal gonadotropin suppression at normal therapeutic doses, not because it increases LH output. In the absence of gonadotropin suppression, Mesterolone supplements androgens necessary for spermatogenesis. Androgens are known to have a direct stimulating effect on spermatogenesis and also affect sperm transport and maturation through effects on the epididymis, vas deferens and seminal vesicles. So the effects of these hormones are not entirely inhibitory. Of course I'm talking about therapeutic doses and in the context of their own flaws

Mesterolone is widely available on the human drug market. Ingredients and dosage may vary by country and manufacturer; formulations typically contain 25mg or 50mg of steroid per tablet, with some manufacturers producing the rarer suspension oral solution.

Pictured: The molecular formula of mesterolone

Mesterolone is a modified form of dihydrotestosterone. It differs by adding a methyl group at carbon 1, which helps protect the hormone from hepatic metabolism during oral administration. Oral Mesterolone tablets also use the same structural modification. On the first pass, alkylation at one position slows the hepatic metabolism of the steroid, albeit much less than c-17α alkylation. Mesterolone is sufficiently resistant to break down to achieve therapeutically beneficial blood levels, although total bioavailability is still much lower than c-17α alkylated oral steroids. Mesterolone also has a very strong binding affinity for sex hormone binding globulin. This may turn other steroids that bind more weakly to SHBG into a free (active) state.

Mesterolone is not aromatized by the body and has no measurable estrogen. Antiestrogens are not required when using this steroid, as the drug is unlikely to induce gynecomastia, water retention, or other estrogen-related side effects. In fact, Mesterolone acts as an anti-aromatase drug, preventing or slowing the conversion of steroids to estrogen. The effect is somewhat comparable to that of anastrozole, but not as strong as that of anastrozole. Mesterolone's anti-estrogenic properties are not unique, and many other steroids have demonstrated similar activity. For example, dihydrotestosterone and tripasterone have been successfully used as therapies for gynecomastia and breast cancer due to their strong androgenic and potential antiestrogenic effects. It has also been suggested that another steroid, nandrolone (Deika), may even reduce aromatase activity in peripheral tissues, where it is more resistant to estrogen conversion (the most active site of aromatization for nandrolone appears to be the liver) . The antiestrogenic effects of all these compounds may be due to their ability to compete with other substrates for binding to aromatase.

Mesterolone is classified as an androgenic steroid. Androgenic side effects are common with this substance, especially at higher doses. This can include oily skin, acne and body/facial hair growth. Anabolic/androgenic steroids may also exacerbate male pattern baldness. Women are also warned about the potential virilizing effects of anabolic/androgenic steroids. These may include a deepened voice, irregular menstruation, changes in skin texture, facial hair growth, and an enlarged clitoris. In addition, 5-alpha reductase does not metabolize mesterolone, so its relative androgen is not affected by finasteride or dutasteride.

Mesterolone is not c17-alpha alkylated and is not known to produce hepatotoxic effects; hepatotoxicity is unlikely.

Anabolic/androgenic steroids can have deleterious effects on serum cholesterol. This includes a tendency to lower HDL (good) cholesterol values and increase LDL (bad) cholesterol values, which may shift HDL toward LDL balance in favor of a greater risk of arteriosclerosis. The relative effects of anabolic/androgenic steroids on serum lipids depend on dose, route of administration (oral vs. injection), steroid type (aromatizable or non-aromatizable), and level of resistance to hepatic metabolism. Mesterolone, an oral non-aromatizable androgen, is expected to have a significant negative effect on lipids. A study that gave hypogonadal men 100 mg of Mesterolone daily for about 6 months showed a significant increase in total cholesterol (18.8%) and LDL cholesterol (65.2%) and should not be used when cardiovascular risk factors preclude the use of other oral steroids Mesterolone. To help reduce cardiovascular strain, it is recommended to maintain an active cardiovascular exercise program and minimize saturated fat, cholesterol, and simple carbohydrate intake at all times during active AAS administration. Supplementation with fish oil (4 grams per day) and a natural cholesterol/antioxidant formula such as LipidStabil or products with comparable ingredients is also recommended.

Mesterolone has a very weak inhibitory effect on gonadotropins and serum testosterone. Studies have shown that significant suppression of testosterone levels does not occur when administered at moderate doses (150 mg or less per day). In studies with high doses of mesterolone (300 mg per day and above), the drug strongly suppressed serum testosterone.

To treat androgen insufficiency, Mesterolone is usually given in a dose of 1 tablet (25 mg) three times a day at the start of treatment. The drug was later continued at a lower maintenance dose, usually consisting of 1 tablet (25 mg) taken once or twice a day. Similar doses are used to support male fertility and are often used with other fertility medications such as injectable FSH. The usual dose for male athletes is 50 mg to 150 mg of Mesterolone per day, or 2 to 6 25 mg tablets. The drug is usually taken in cycles of 6-12 weeks, which is usually a sufficient period of time to notice the benefits of drug therapy. Many bodybuilders prefer to use mesterolone during the dieting phase or during competition preparations, as low estrogen and high androgen levels are specifically required. This is especially useful when drugs such as stanozolol, oxandrolone, or primolone are used alone, which are relatively low in androgen content. Mesterolone can be effectively used to upregulate the androgen to estrogen ratio, thereby increasing muscle stiffness and density, supporting libido and general well-being, and increasing the tendency to burn body fat. Gynecomastia prevention is also commonly used (at similar doses) when other aromatizing estrogenic steroids are administered, usually in combination with 10-20 mg of tamoxifen per day.

Mesterolone is not approved for use in women. Due to its strong androgenic properties and propensity to produce virilizing side effects, it is not recommended for women to enhance physique or improve performance. However, some women do like the drug and find that one 25mg tablet is effective enough to alter the hormonal balance in the body, greatly affecting the definition of physique. In this case, intake is usually limited to no more than four or five weeks to minimize the chances of having a lasting virilizing effect. One tablet combined with 10 or 20mg of tamoxifen can more effectively promote muscle hardening, creating an environment here where the body is more likely to burn extra body fat, especially in women's stubborn areas of fat accumulation such as buttocks and thighs. 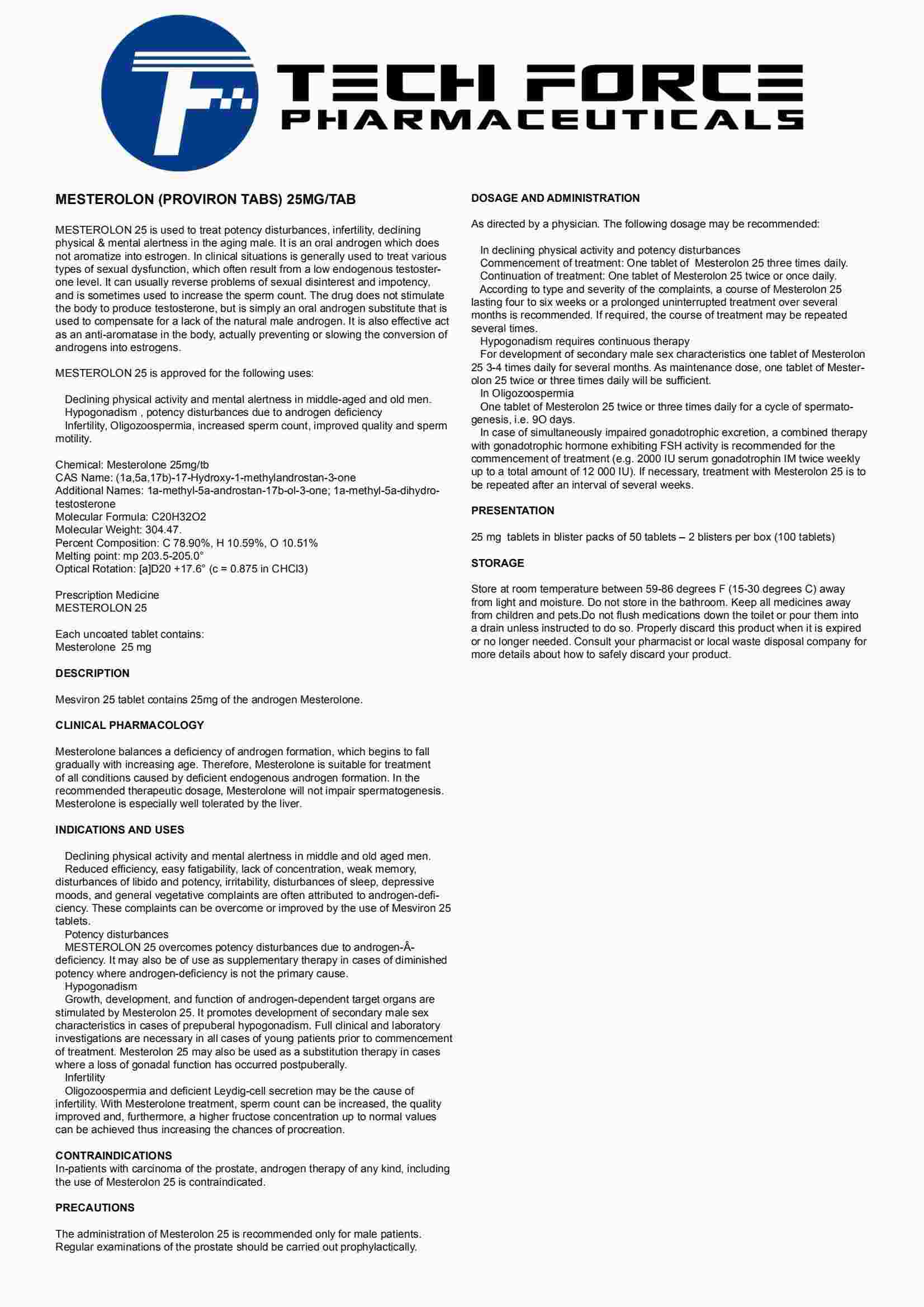