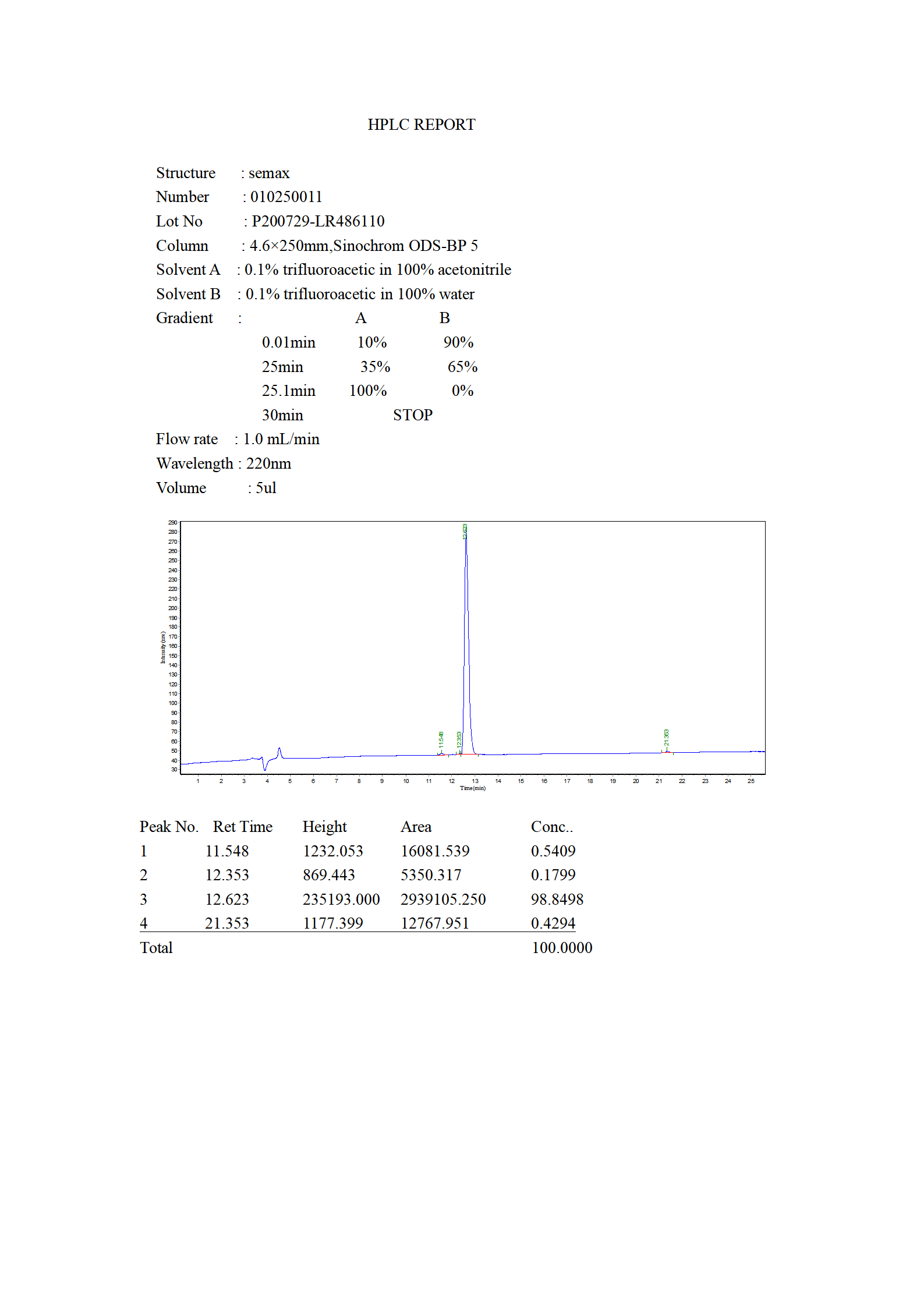 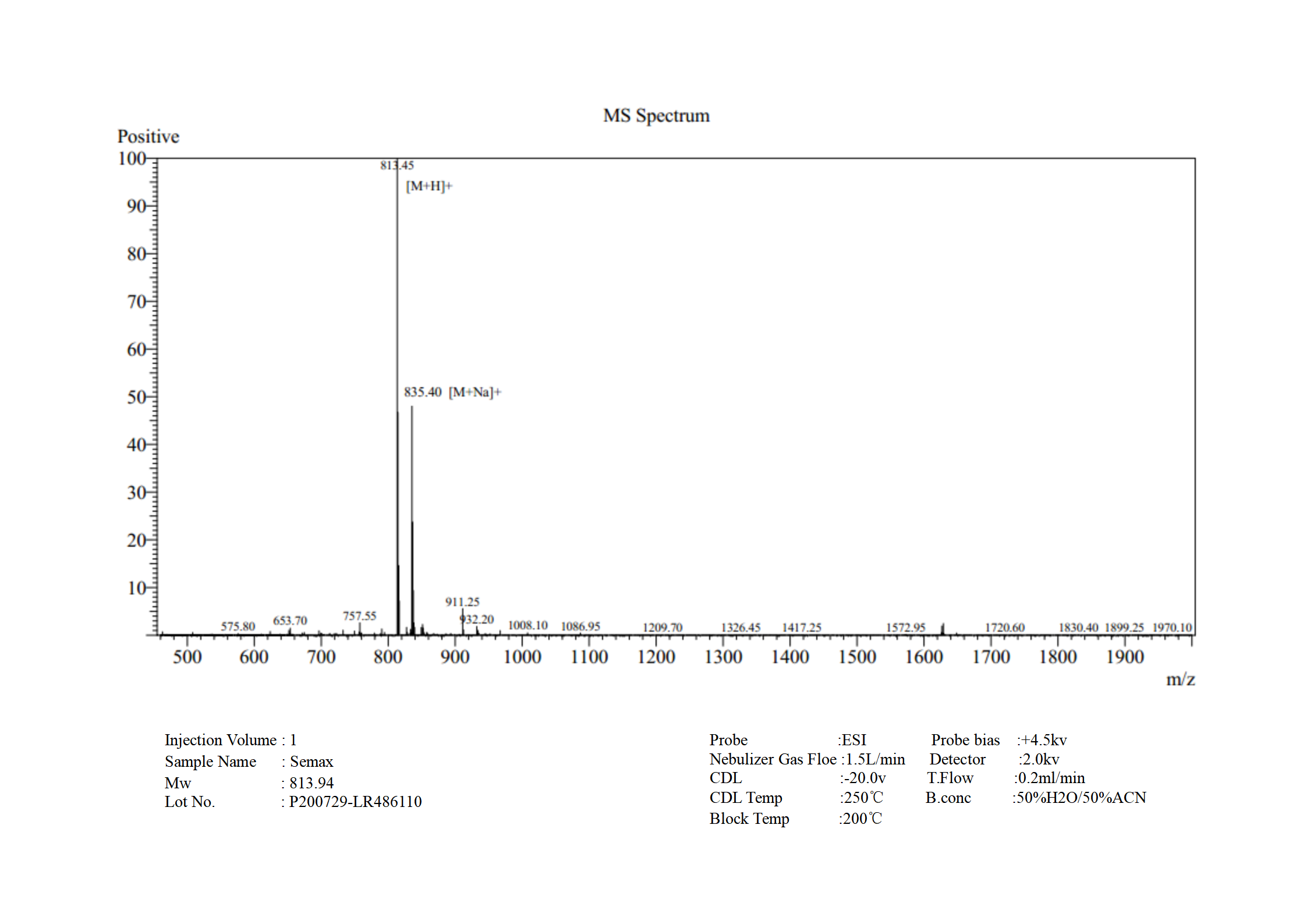 What is Peptide Semax?

Semax is what's called a synthetic heptapeptide, meaning that it's a chain of 7 amino aci-ds as a single molecule. Interestingly enough, the semax molecule mirrors a fragment of adrenocorticotropic hormone, which is released in the pituitary gland of humans in response to environmental stress.

It was originally developed in Moscow, Russia as a treatment mostly for neurological-related disorders, such as poor memory, depression, ADHD, and post-stroke treatment.

Additionally, Semax can be used as an immune-system booster or as a treatment for peptic ulcers, strangely enough.

Semax can also be used off-label as a nootropic, with many properties that make it quite suitable for regular use.

It is particularly beneficial to ischemic stroke victims and individuals who have suffered other forms of head trauma but has also been used in the treatment of cognitive disorders, optic nerve disease and peptic ulcers.

Semax works by modulating receptors in the Limbic Reticular complex and for the neurotransmitters acetylcholine, dopamine, serotonin, adenosine, histamine and others. It also activates NMDA receptors for glutamate in the central and peripheral nervous system and enhances energy metabolism in your neurons.

Additionally, Semax increases synthesis of neurotrophins, proteins and biosubstrates to protect and repair neurons while also reducing inflammation. This item exhibits highly neuroprotective properties and has been recorded to increase mRNA for Nerve Growth Factor by 500% and for Brain Derived Neurotropic Growth Factor by 800%.

In between the 2 - 3 decades since semax was synthesized and tested, there have been numerous studies on animals and humans to see the benefits of the drug. One of the primary benefits of semax is as a cognitive enhancer. One 2 day study of power plant workers tested semax and memory formation. The 1 mg dose 1 hour prior to the exam showed a drastic increase in correct responses.

The mechanism for improving cognitive function relates to brain chemicals like BDNF and NGF. Semax can increase BDNF and NGF by 8 and 5 times the baseline. Numerous other studies have confirmed the increase in BDNF, which acts as a type of fertilizer for the brain to develop new neurological connections.

The benefits for alpha brain waves may also help support positive mood enhancement and reducing anxiety. Semax benefits include reducing symptoms of stress and depression. The Journal of Psychophysiology published a study on the sedative effects of semax on those who were suffering from mental illness. Part of these benefits may come from an increase in serotonin turnover, which is traditionally done with SSRIs.

Finally, an interesting but not incredibly well-researched benefit of semax is as for stimulant potentiation. Studies show that semax in combination with stimulants (such as amphetamine) could increase the dopamine release from the drug. One study showed an increase of activity from 182% (just the amphetamine) versus 261% (amphetamine and semax).