The English name of Trenbolone enanthate is: Trenbolone enanthate, which is often referred to as TREN-E in China. Trenbolone enanthate is an extremely powerful anabolic steroid. Hexahydrobenzylcarbonate) can basically be used interchangeably. Considering the use of enanthate, the drug will show nearly the same pharmacokinetics as testosterone enanthate, providing a peak release of its steroid for the first few days after injection, followed by decreasing levels for about 2 weeks. The base steroid here, Trenbolone, is a derivative of Nandrolone, which has powerful anabolic and androgenic properties. In mg, it is far more ferocious than basic steroids like testosterone. Trenbolone also cannot be converted into estrogen, but Trenbolone has significant progestin activity and can also cause estrogen-related side effects under certain physiological conditions.

In a series of experiments conducted by Roussel-UCLAF on anabolic steroids, the slow-acting trenbolone ester was investigated for the first time. Roussel did not specifically study trenbolone enanthate, although steroid esters (including enanthate) were widely used in the United States in the 1960s, and trenbolone enanthate was first sold for commercial sale only in 2004. Often classified as a veterinary anabolic steroid, Trenbolone Acetate is not only a favorite Trenbolone product for prep bodybuilders, but it is also essential for the livestock market. However, Trenbolone Enanthate does not fall into this category, not technically. Trenbolone Enanthate is strictly an underground black market anabolic steroid. It was launched by underground manufacturer British Dragon. British Dragon will be sold under the trade name Trenabol in a concentration of 200 mg/ml. Although Trenabol is not sold through pharmacies and is not intended for human or veterinary use, it is widely distributed around the world and has become a very popular product for most sports athletes and bodybuilders. A large part of this is due to the uniqueness of Trenbolone Long-Acting Ester, as it is one of the only options for injectable Trenbolone that uses a slow-acting ester (no choice). At the time of its introduction, trenbolone acetate was essentially the predominant form of trenbolone product, and is still the predominant form of trenbolone acetate today. While British Dragon may be the largest and best-known underground steroid maker in the world, the company suddenly collapsed in late 2006. The brand has resurfaced under a new owner. Trenbolone enanthate continues to be sold by many underground laboratories.

Trenbolone Enanthate is a 19-nortestosterone (19-nor) anabolic androgenic steroid. The 19-label refers to a structural change in the testosterone hormone because it lacks a carbon atom at the 19th position. Trenbolone is a modified form of Nandrolone. It differs by introducing double bonds at carbons 9 and 11, which inhibit aromatization (9-ene), a structural change that slows its metabolism, greatly increases its binding affinity for androgen receptors and Inhibiting it will not be aromatized into estrogen by the body. The resulting steroid is significantly more potent as an anabolic and androgenic hormone than its nandrolone base, which is just a modified form of nandrolone, itself a structurally altered form of testosterone. This small change makes a huge difference when we break down various steroids, but the relationship in the overall sense is often closer to what we might realize. Trenbolone is just a minor modification of Nandrolone, but it really creates a different hormone and is much more powerful than Nandrolone. Modified with the heptanoate on the 17-beta hydroxyl group, trenbolone heptanoate is modified with the heptanoate on the 17-beta hydroxyl group, thus allowing for a slow release after injection. In addition to the fact that the attached Trenbolone is attached to different ester chains, it will also affect its actual active content. Because the ester itself also accounts for a portion of the attached steroid, the chart below shows the actual active ingredient content of common Trenbolone.

Protein is the main building block of muscle. It's not the only factor in muscle growth, but it's the main one. Trenbolone Enanthate can improve the speed and efficiency of cell building protein. With the increase of protein synthesis, the body will have more protein to maintain body function and promote muscle growth, which greatly increases the body's anabolism The environment also greatly improves the overall recovery speed, which is very important for muscle building, not only during muscle building, but also the effect of trenbolone enanthate in preserving lean body mass during fat loss. It is also very obvious and important.

All muscle tissue consists of about 16% nitrogen. As nitrogen levels drop, this can lead to catabolism, what you call a muscle-loss state. The more nitrogen we retain in our muscles, the better our anabolic and recovery capacity will be.

Insulin-like growth factor-1 (IGF-1) is a potent protein hormone among peptides, mainly produced by the liver. Insulin-like growth factor plays an integral role with growth hormone (HGH) in a regulatory sense and has a powerful anabolic effect, IGF-1 affects virtually every cell in the human body, including muscle tissue, ligaments and tendons, Cartilage, bones, the central nervous system, and even our lungs.

[5] The inhibitory effect of glucocorticoids:

Most of all anabolic steroids will promote and improve the body's metabolism, the improvement of basal metabolism, to help us increase the calorie deficit, so as to help our body reduce fat. In addition, the binding of thoracic hormone to the androgen receptor can directly promote lipolysis. Trenbolone enanthate can actually help directly burn body fat through its strong affinity with androgens, which is very beneficial for off-season growth and fat loss.

The above six functional properties of Trenbolone Enanthate are enough to make it a very powerful and beneficial anabolic steroid. However, its ability to increase or increase the efficiency of nutrient utilization really makes Trenbolone the strongest anabolic steroid ever. With Trenbolone Enanthate, every nutrient we absorb becomes more valuable. We are now better able to use every gram of fat, protein and carbohydrates we consume. Without hormones like Trenbolone, the body can only utilize each nutrient to a certain extent, and each nutrient will never be fully utilized. That is, by using Trenbolone, every grain of rice, every piece of chicken breast you eat, will be maximized by your body.

Trenbolone is known to be the most commonly used steroid during fat loss, which is a difficult point to argue against. However, Trenbolone Enanthate is also very beneficial during off-season muscle building. Because Trenbolone has the ability to promote the growth of true lean muscle tissue much faster than most anabolic steroids. What's more, it will do it in a cleaner way than most steroids, and Trenbolone Enanthate won't cause water storage or fat storage compared to other steroids that have significant muscle-building effects (of course if you eat and drink , no steroid can save you), every pound you gain with Trenbolone is pure muscle mass. All people who use trenbolone enanthate will find their muscular endurance greatly enhanced and their recovery significantly improved, however, a small percentage of people who are sensitive to trenbolone will experience decreased cardiovascular endurance while using trenbolone , which will make it impossible for some people who are overly sensitive to Trenbolone to use it.

Trenbolone is not aromatized by the body for conversion to estrogen and has no estrogenic activity, however, it is worth noting that Trenbolone exhibits significant binding affinity for progesterone receptors (slightly stronger than progesterone itself ). Trenbolone also causes a temporary increase in thyroid hormone levels, which can lead to an increase in prolactin levels. In this case, you can use T3 compounds to increase fat loss. Progesterone-related side effects are similar to those of estrogen, including negative feedback inhibition of testosterone production and increased body fat storage. Progesterone also enhances the stimulating effect of estrogen on breast tissue growth. There is a strong synergy between progesterone and estrogen, so gynecomastia (the estrogenic reaction) may even occur when estrogen levels are not high but progesterone levels are elevated. Progestin side effects are more likely to occur when Trenbolone is treated with other aromatizable steroids.

Trenbolone has sufficient androgenic activity so that androgenic side effects from trenbolone are common and may include hypersecretion of sebaceous glands, acne and body/facial hair growth, and benign prostatic hyperplasia. The androgenic activity of trenbolone may also exacerbate hereditary male pattern baldness. Trenbolone use in women may also be associated with masculinizing effects, which may include a deepening of the voice, irregular menstrual periods, changes in skin texture, facial hair growth, and clitoral enlargement. In addition, 5-alpha reductase does not metabolize trenbolone, so its relative androgenic properties are not affected by finasteride or dutasteride.

Trenbolone is not c-17α alkylated and is generally not considered a hepatotoxic steroid; however, this steroid does have strong resistance to liver failure and has been reported in some bodybuilders who abuse trenbolone Severe hepatotoxicity was noted. Although trenbolone is unlikely to cause liver toxicity in theory, liver toxicity cannot be completely ruled out, especially at high doses. In addition, some people will also find yellow urine when using high doses of trenbolone.

All anabolic steroids can have deleterious effects on serum cholesterol. This includes a tendency to lower HDL (good cholesterol) values and increase LDL (bad cholesterol) values, which may shift HDL toward LDL balance, increasing the risk of developing arteriosclerosis. The relative effects of anabolic steroids on blood lipids depend on dose, route of administration (oral vs. injection), type of steroid (aromatizable or non-aromatizable), and hepatotoxicity. Anabolic steroids may also adversely affect blood pressure and triglycerides, reduce endothelial relaxation, and may cause left ventricular hypertrophy of the heart. Trenbolone, due to its non-aromatizable nature and strong metabolic resistance, is highly lipid- and atherogenic The risk of sclerosis-like sclerosis has a moderate-to-high effect.

Trenbolone can also cause some physiological effects. This is because of the androgenic properties of Trenbolone. Trenbolone affects the emotions in the brain, causing irritability, impulsiveness, etc., causing feelings of aggression, anger or anxiety. , Some people are quite sensitive to this, on the contrary, after stopping the use of steroids, fluctuations in the body's hormone levels can also affect our brain mood, some people may experience depression, low libido and many other symptoms.

Trenbolone can stimulate the nervous system, especially in large quantities. Therefore, individuals may have difficulty sleeping, may not feel tired, or may feel restless. Trenbolone may also cause an increase in sweating in a small number of sensitive people, especially night sweats during sleep at night. The use of trenbolone should increase water intake, because Excessive sweating can lead to dehydration, and apart from medications, another possible cause of insomnia is a condition caused by vitamin B intake.

Trenbolone enanthate side effects (inhibition of own testosterone secretion):

All anabolic steroids inhibit natural testosterone production at doses that promote muscle growth. Trenbolone inhibits testosterone secretion three times as much as testosterone. Exogenous testosterone must be included during use to avoid low testosterone. If there is no steroid intervention, the natural secretion of testosterone will return to normal within 1-4 months after stopping steroid use, but 1-4 months is too long, and it is easy to lose the benefits obtained during the cycle , so PCT recovery is recommended immediately after drug discontinuation.

Trenbolone enanthate has never been approved for use in humans. The current common dose range is 150-300 mg per week, usually continuous for 6-10 weeks. This is enough for a significant increase in muscle mass and precision 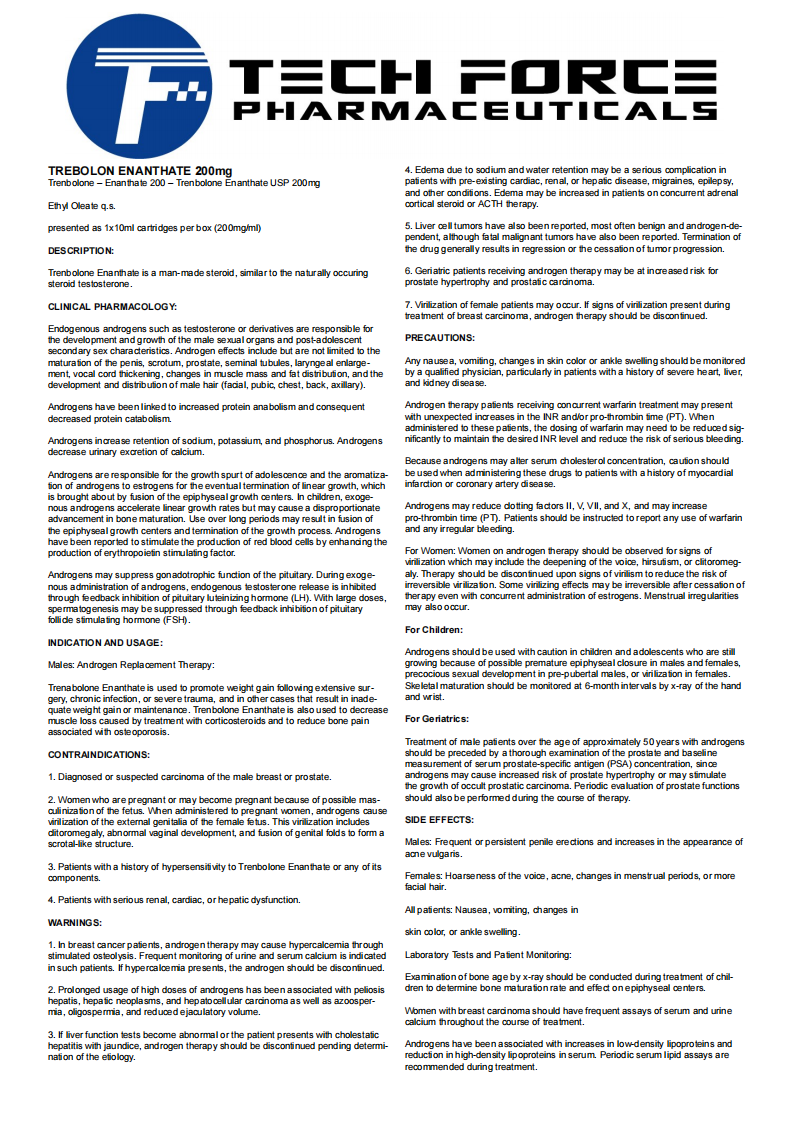