Growth hormone (GH), also known as somatotropin (or as human growth hormone [hGH or HGH] in its human form), is a peptide hormone that stimulates growth, cell reproduction, and cell regeneration in humans and other animals. It is thus important in human development. It is a type of mitogen which is specific only to certain kinds of cells. Growth hormone is a 191-amino acid, single-chain polypeptide that is synthesized, stored, and secreted by somatotropic cells within the lateral wings of the anterior pituitary gland. 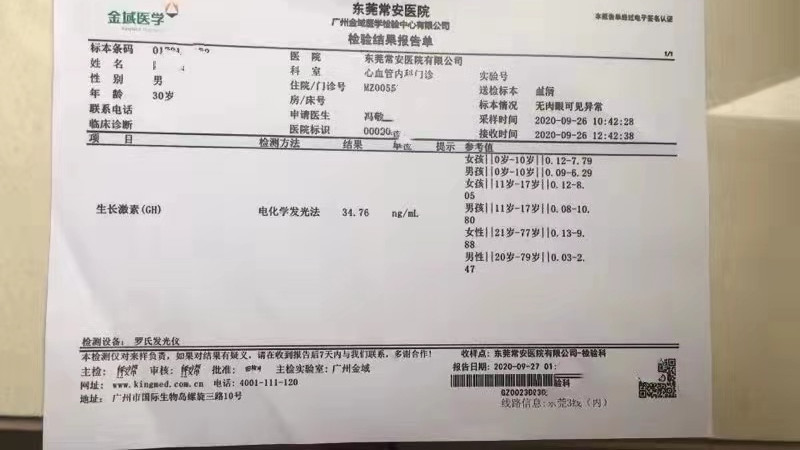 Injectable GH is typically provided as lyophilized powder in vials.

Any injectable GH product should be identical with natural GH, which has 191 amino acids. Some products however are a cheaper analog with 192 amino acids. These products can cause adverse immune response and should not be used.

Desirable Effects of Growth Hormone Use

All the above are potentials rather than guarantees.

Possible and Likely Adverse Side Effects of Growth Hormone Use

Growth hormone can be used with good safety. However, there are possible adverse side effects, particularly with high dosing and especially with chronic high dosing.

GH use can cause insulin resistance, increase serum free fatty acids, and increase TNF-alpha, lipoprotein (a), and fibrinogen. These effects can act towards increasing cardiovascular risk.

Of these, the most consistent effect is insulin resistance. This can essentially be guaranteed at sustained higher doses.

Other possible adverse side effects of GH use include increase in skin tags, imbalance in phosphate levels, hypervitaminosis D, promotion of arthritis, and growth promotion of existing cancers or polyps.

Incidentally, while increase in skin tags could seem a minor thing, there’s a strong correlation between having more than 3 skin tags and having increased risk of colon polyps. Gaining skin tags, then, may be a warning sign.

Long term GH use giving levels comparable to those occurring naturally in acromegaly may yield the adverse consequences of that condition. These include diabetes, hypertension, heart disease, heart enlargement, joint thickening, arthritis, coarse facial features, enlargement of hands and feet, thick skin, darkened skin, chronic fatigue, impotence, increased rate of death from cardiovascular disease, increased rate of death from cancer, and a two to four times overall increase in mortality rate. Of course, in acromegaly high GH levels are experienced for years or decades on end, and not every person with the condition suffers all these effects.

With all this said, when used in moderation GH’s track record for safety in bodybuilding is good. Problems usually are limited to worsening of insulin sensitivity and, commonly, carpal tunnel syndrome or other neuropathies which usually are reversible on cessation of use.

What does growth hormone itself do at higher doses, exclusive of what may happen from released IGF-1?

Overall, the effects promote anabolism and a metabolic shift towards fat-burning over glucose-burning.

At supraphysiological doses, GH also increases lipid storage within muscle cells, which is an adverse effect, yielding to some extent lipotoxicity. (Only adipose cells are capable of storing substantial amounts of lipids without self-harm and metabolic impairment.)

At normal GH levels, the story in muscle is largely the same as above, except that normal GH levels actually support normal insulin signaling, rather than impair it, and do not cause abnormal lipid storage.

In both muscle tissue and the liver, GH also stimulates production of IGF-1. IGF-1 produced by the liver provides systemic effect; the effect of IGF-1 produced in muscle is thought to be mostly local.

In skeletal muscle, IGF-1 stimulates glucose uptake, the opposite effect of growth hormone itself. It also promotes protein synthesis, reduces catabolism, decreases breakdown of glycogen, and can increase the number of nuclei per muscle cell by promoting myoblast proliferation and fusion.

That last part is how GH or IGF-1 use can profoundly affect potential for muscular size.

In adipose tissue, IGF-1 has relatively little effect. It does not appear to affect lipolysis or lipogenesis. While IGF-1 alone can aid leanness, this is principally from effect on muscle and overall metabolism, not from direct effect on fat cells.

In the liver, IGF-1 has rather little effect as the liver has few IGF-1 receptors. The liver’s principal involvement with IGF-1 is as a producer of it in response to GH, rather than as a responder to it.

Storage, Reconstitution, and Injection of GH

Unreconstituted growth hormone vials should generally be stored under refrigeration, but may be kept at room temperature for short periods, for example while shipping.

Vials of GH are reconstituted with a convenient amount of bacteriostatic, sterile, or sterile saline water for injection. For example, an 8 IU vial can conveniently be diluted with 0.8 mL or 1.0 mL of water. In the first instance, each 0.1 mL, which is marked “10 IU” on an insulin syringe, will provide 1 IU of GH. This would allow easy calculation for any injection amount.

Other amounts of water, such as 1.0 mL, may also be used.

A problem with using small amounts of water can be that after drawing everything possible from a vial, a substantial percentage of it may remain, causing significant loss of GH. The loss can be about 10%.

One solution is this: Reconstitute your next vial by first adding the needed amount of water to the near-empty vial, then drawing it, and finally adding to the new vial. This will transfer nearly all the remaining GH to the new vial. There is no need to worry about resulting dosing error: over time everything averages out.

If that method does not appeal, another solution is to use a larger amount of water for reconstitution. For example, 2.4 mL of water can be used for an 8 IU vial. Each 0.3 mL of injection then provides 1 IU. And if the last 0.1 mL cannot be drawn from the vial, this is them only about a 4% loss. That’s still a waste, but it’s much reduced compared to reconstituting with less water.

Reconstituted vials should always be refrigerated, although a vial accidentally left at room temperature for a single day need not be discarded, if completely confident about its sterility.

Injection is typically with an insulin syringe, and is intramuscular (IM) or subcutaneous. As personal opinion IM is better as the delivery is a little faster, better matching natural release of GH. Intravenous injection provides even faster delivery of course but as personal opinion is not worth the added trouble. If personally finding it convenient, though, it’s another option.

Redness and Swelling in Response to GH Injection?

Redness and swelling should not occur at a growth hormone injection site. That said, with legitimate, sterile GH a very small percentage of injections will go wrong in some unknown way, temporarily causing these effects. A reason for this could be the needle picking up some skin bacteria in the injection process, despite good procedure. If the redness or swelling subsides, a single such event should cause no suspicion of the product.

If it’s a known-good product yet such responses occur twice in a row, the vial should be discarded. It may have become contaminated.

If it’s a product which is new to you and unproven, then the most likely explanation is that it is a cheap, 192 amino acid product which no one should use. Continued use could result in developing immune response not only to the bad product, but to genuine GH as well.

For a high degree of improvement in muscle mass and/or fat loss in anabolic steroid cycles, 4 IU per day is a gold standard amount in my opinion. However, not all can tolerate this.

Many need to limit growth hormone dosing to no more than 2 IU per day to avoid serious side effects, particularly carpal tunnel syndrome and other neuropathies. At this use level, dosing is preferably divided, but it’s a fine point. If individual preference calls for injecting GH only once per day, that will work fine.

When using about 4 IU per day, it becomes very preferable to divide it into at least two doses per day. Even further division of the dose may be better yet.

What about going over 4 IU/day? If there’s still room to improve results by increasing anabolic steroid dose, I think this is a safer and better path than taking GH usage beyond this amount. In fact, I recommend first optimizing the anabolic steroid component of a stack before exceeding the 2 IU/day level.

It may also be better, rather than going past this amount of GH, to add IGF-1 to it rather than to add more GH. Not only to avoid further worsening of insulin sensitivity, but for greater effectiveness.

At the other end of the spectrum, GH is sometimes used at lower dosing such as 1 IU/day or 2 IU every other day. Younger lifters will find such a use to be a waste: they will experience little benefit from it. For older lifters, however, such dosing can provide noticeable benefit, as their natural GH production is lower. Reasons to choose low dosing usually would be cost or conservatism rather than intolerance of midrange dosing.

Dosing of GH for Quality of Life Improvement

Where an older person wishes benefits of GH such as improved skin appearance, a leaner set-point, and improved feeling of vitality, a good dosage range is about 7-10 IU per week, with individual doses preferably being about 1-2 IU at a time. Of course some use more, but I’m not convinced that over time this won’t be counterproductive.

Dosing of GH for Longevity

By far the preponderance of evidence is that the reduction in growth hormone that occurs with age actually enhances longevity, and that taking GH in amounts causing supraphysiological levels will more likely shorten life rather than extend it.

I suggest that if wishing to at least maintain the same longevity but with improved quality of life, then certain things should be closely monitored. Serum IGF-1 most likely should be kept within the normal range, and fasting glucose, oral glucose tolerance, lipoprotein(a), fibrinogen, and water retention should be monitored. If none of these are adversely affected at all by the GH administration, there’s reasonable hope I think that expected lifespan won’t be shortened, or if so, only minimally.

If any parameters are adversely affected, my suggestion would be to reduce the dose if longevity is a key goal.

For older users, higher dose use of GH for serious anabolic or fat loss results should be done within anabolic steroid cycles, but additional lighter use in some off weeks may be an aid.

For those who do not use anabolic steroids but wish to use GH for enhanced quality of life, I don’t have specific cycling recommendations. As opinion, it is probably better to cycle GH than to use it continually. I would avoid allowing obvious physical decline between cycles. It could be reasonable to alternate moderate-dose use with maintenance low-dose use. This is an unstudied area.

Some do obtain good results using IGF-1 without GH, but some don’t. Additionally, IGF-1 administration suppresses natural GH production, and as discussed above, GH has some beneficial anabolic and fat loss actions which IGF-1 does not have.

If considering IGF-1, I recommend supporting it with GH.

Why Do Some Combine Insulin with GH in Mass Gain Cycles?

Increase of GH by Administration of Peptides

Nutritional supplements purporting to increase GH generally do not do so, or don’t do so to a useful extent.

Normal growth hormone levels are necessary for normal health. Elevated GH levels can promote anabolism and fat loss, but may have health risks. Typical dosing in bodybuilding is 2-4 IU per day, typically used concurrently with steroid cycles. Higher doses are used by some. Carpal tunnel syndrome and other neuropathies are the most common adverse side effects. Chronic supraphysiological dosing of GH probably shortens lifespan rather than increases it. Moderate GH using can improve quality of life for older persons and judicious use may be neutral in effect on lifespan, while improving its quality. GH levels may be increased by injecting GH itself, or by injecting peptides which increase natural production of GH. For means of doing this, see profiles on GHRP-6 and Mod GRF 1-29.